Blessed Andrea was born as Hyacinth Bonaventure Longhin on November 22, 1863 in Fiumicello di Campodarsego (Italy). He was the only son of Mathew and Judith Marin, poor and pious tenant farmers.

At the age of 16, against the wishes of his father, he became a Capuchin novice, taking the name Andrew of Campodarsego. Andrea was a spiritual director for young religious; at the Capuchin Seminary at Udine; served as director of Capuchin teachers at Padua; served as director of theology students in Venice; became Capuchin Provincial Minister at Venice; and was then ordained in Rome as Bishop of Treviso.

During Andrea’s time as bishop, he reformed the diocesan seminary, improving the quality of teaching and spiritual formation. He promoted spiritual retreats for the clergy, and worked with lay groups, especially those involved in the Catholic social movement, supporting the right for workers to organize. During World War I he was imprisoned for refusing to ally himself with any of the war parties. Upon his release, he resumed his work of ministering in his diocese and rebuilding the city and the 47 parishes that had been destroyed and was eventually awarded the Cross of Merit war decoration.

On June 26, 1936 in Treviso, Italy, Andrea died of natural causes following an eight-month illness. He was Beatified on October 20, 2002 by Pope John Paul II. 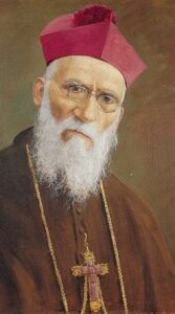 Lord, God, you filled Blessed Andrea, your bishop, with ardent desire for unity among all Christians; grant that we through his intercession, may be renewed in spirit and heart so that we can spread your love to everyone and confidently work for the unity of all Christians int he bond of peace. We ask this through our Lord Jesus Christ, your Son, who lives and reigns with you and the Holy Spirit, one God, for ever and ever.