He entered the Capuchin Order at 23 years of age. Ordained a priest, he dedicated himself to assisting the clergy in the parishes and preaching popular mission. During the French Revolution, because of his unwavering loyalty to the Catholic faith and his refusal to take the schismatic oath prescribed by civil law, he, together with many others was martyred on September 2, 1792.

Pope Pius XI declared him blessed, together with another 190 martyrs on October 17, 1926. 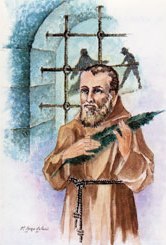 O Lord, help us to love your Church with filial devotion for whose defense the Blessed Apollinaris, strengthened by your grace, faithfully fought till his death. We ask this through our Lord Jesus Christ, your Son, who lives and reigns with you and the Holy Spirit, for ever and ever.