Lawrence Maurice, the fourth of six children of Mary Elizabeth Balocco and Peter Paul Belvisotti, was born on June 5, 1686, at Santhia (Vercelli) Italy. When Lawrence was seven years old, his father died and his mother entrusted his care and education to a local priest who fostered the youngster's vocation to the priesthood.

Already a priest, he insistently sought to join the Capuchins and was finally accepted at 30 years of age, where he received the name, Ignatius, and began serving as sacristan. After five years, Ignatius was made the Assistant Master of Novices and after one year, he was given the roles of Sacristan and Confessor to the Laity. Because he treated hardened sinners with utmost compassion and tenderness, he became known as "the father of sinners and of the depressed." After fourteen years, his ministry was interrupted when he contracted a mysterious eye ailment. After he partially recovered, he became head of Chaplains for the King of Piedmont's armies, a position he held for two years. At the age of 60, Ignatius was reinstalled as Confessor and Spiritual Director and remained in this service for twenty-four years. In his final years he made a special point to see the sick and very poor. 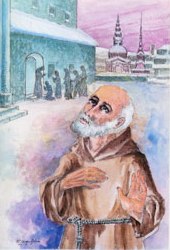 Almighty and eternal God, you wanted that our human nature be restored by obedience which makes up for what was lost by pride: grant that through the prayers and example of the priests, blessed Ignatius, we may always be ready to do your will, since you teach us that this is the beginning of our salvation. We ask this through out Lord Jesus Christ, your Son, who lives and reigns with you and the Holy Spirit, one God, for ever and ever.